Few leaders in the world have amassed such fame as the French Napoleon Bonaparte (also Buonaparte). He was born in Corsica on 15th August 1769 – 242 years ago – to Carlo Buonaparte and Letizia Ramolino. By the time of the French Revolution (1789) he was 20 years old and by the time of his coronation to become Napoleon I, the Emperor of the French, he was only in his mid-thirties. His successes on the battlefield allowed him to spread France’s sphere of influence over most of Europe. The Napoleonic Wars (1803-1815) reshaped the balance of power in Europe completely and had great effects on colonial regions – especially in the Americas. The French Civil Code, also known as the Napoleonic Code, was a major step in introducing a more equal society in Europe. Napoleon’s impressive footprint in European history can still be seen in numerous documents and artworks. Today’s blog post focuses on three of these objects.

The Bowes Museum describes the painting to the left as follows:
In 1812 Napoleon commissioned Anne-Louis Girodet to paint 36 full-length portraits for distribution to his imperial offices. Only 26 were ever completed, however; this painting being one of them. As in many of Napoleon’s official portraits, he is dressed in the full regalia of his coronation which took place in 1804. The laurel crown, the monogram on his chain, and the golden bees decorating the carpet and his sumptuous robes, were all distinctive Napoleonic symbols. The artist has depicted the Emperor in profile with his body turned toward the viewer and his hand outstretched over a copy of the Code Napoléon.

The Napoleonic Code greatly hindered upper classes’ possibilities of using their hereditary power to their advantage. The Code contained provisions on government posts going to the most qualified, an orderly penal system and rule of law. Its influence was remarkable during and after the Napoleonic wars and formed a strong base for the legal systems in the Netherlands, Italy, Belgium, Spain, Portugal and also Poland. Napoleon Crossing the Alps is a dramatic painting by Jacques-Louis David. He was the teacher of Girodet and famous for his historical paintings. A total of five versions on Napoleon Crossing the Alps were made by David the one to the left being the Malmaison version. In this version the cloak, that in other versions appears deep red, is of light orange colour. The carvings on the rocks on the bottom-left corner of the painting show the names Bonaparte, Hannibal and Karolus Magnus who in many places is better known as Charlemagne. The Alps portray significance to all of the three:  Hannibal crossed the Alps during the Second Punic War (218-202 BC), Charlemagne crossed the Alps in 773 on a quest to drive the Lombards back to Pavia and finally Napoleon in 1800. Napoleon’s own campaign over the Alps was forced by the Austrian army laying siege on Genoa. After clever logistic maneuvering Napoleon was able to engage his enemies from advantageous positions and defeat them in the two battles of Montebello and Marengo. 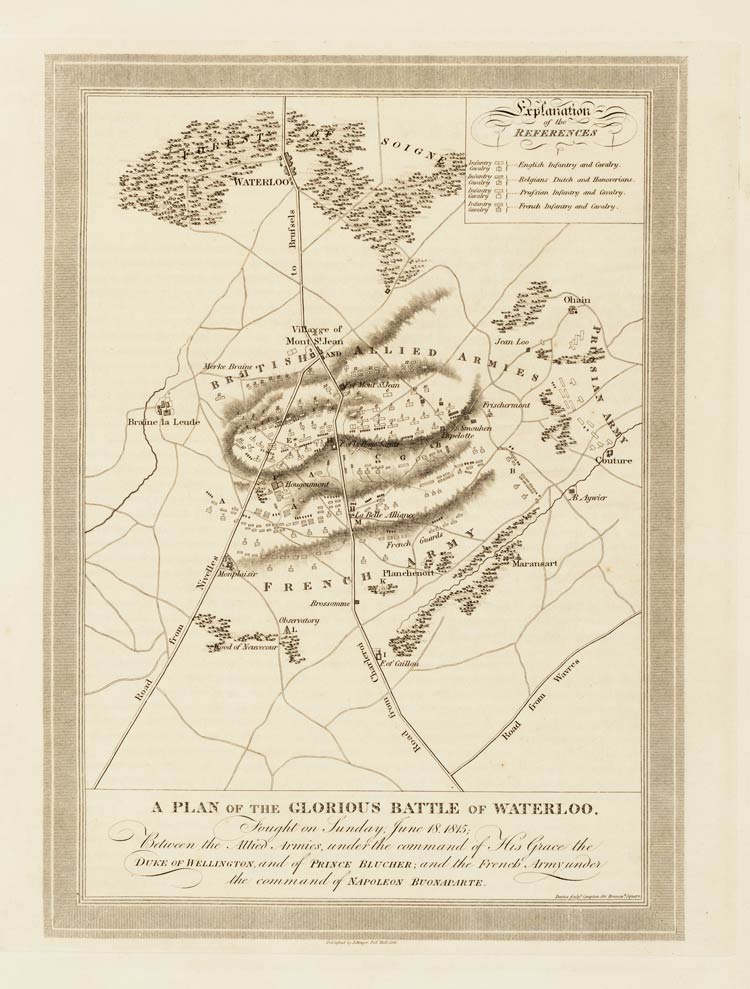 After a decade of French dominance the tides were turned in the Battle of Waterloo in 1815. It was there that the Imperial French Army was defeated by an alliance called the Seventh Coalition. The alliance consisted of the United Kingdom, Prussia, United Netherlands, Hanover, Nassau and Brunswick. The scale of the Battle of Waterloo was considerable when compared to other battles of that era: approximately 190,000 soldiers took part, 72,000 French and 118,000 allied.  The map of the battle reveals the general positions of the two armies and important  logistic routes.

After returning from his brief exile in the island of Elba, West off the coast of Italy, and the Battle of Waterloo he was sent to the island of Saint Helena, far off the coast of South-Eastern Africa. That was to be his last empire where he died on the 5th of May 1821, aged 51. He is now buried in Les Invalides, Paris.